Time is the equaliser of all things; a lesson in training stupidity.

24 Jan Time is the equaliser of all things; a lesson in training stupidity.

Posted at 12:58h in Everything by Firas El Achkar 0 Comments
0 Likes

Progress does not come sharply. The great regulator is time, and no program, insane volume or stupid antics will get you past this axiom. Fail to heed this warning, and you will find yourself dropping off like many junior powerlifters do. Burnt out, bitter and fat, reminiscing about the time you did lift xyz like some old guy at the gym, instead you’ll be 28 instead of 58.

I’ll use my competition history as an example:

Or better yet, here’s a chart: 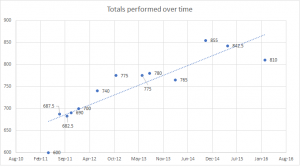 I was very proud of that jump.  The training I did in that 17 week period in 2014 had no grounding in reality, sensibility or reason. Comparing the training I did to anything before shows a ludicrous jump in volume and work. By the end of that prep I had began to loathe training. I became sickly anxious because of the pressure of the strict linear progression I had set for myself. And what for? 300 Instagram likes and a total and performance no one really remembers?

I had simply taken 18 months of laziness, performed a massive over compensation and crammed a huge amount of progress into a 6 month period.  It was a jump in performance fuelled by the anxiety of being the youngest gym owner in Australia, desperate to post big numbers so I could build the brand to justify the commitment I had made. #fpgmethod after all.

The result? A reputation for brutal programming and coaching, built on the idea that nothing couldn’t be overcome if you were just willing to train hard and stupidly enough. You just had to make it happen bro. And not mention I really became an asshole. I also am dealing with chronic pain that is only now beginning to clear itself. I will be talking about this at a later date.

After Proraw 6. I figured I just have to do the same stupid training again, but harder. The volume increased, the frequency increased and then it began to bite.  I began to experience random massive drops on strength. I’m talking about grinding 270kg warm ups, approx 75%. I backed off, and as I began to prepare for the 2015 GPC nationals it happened again, but more frequently. Sharp drops in strength even though I felt ‘fine.’ After GPC nationals 2015, I decided to go really hard. I sustained a brutal pace for about 4 weeks, but by July of 2015 I began to gain fat uncontrollably, was grinding 50% lifts, and experienced something I never thought I ever would; a dislike of the sport of powerlifting and a loss of my passion for strength sports. By March 2016 I limped into Proraw 7, unable to lose any weight despite sustained periods of dieting at less than 2500 calories, unsure whether I would have a good day or miss a 70% warm up, having had to hot tub for 2 hours to make weight.

Now think about this; starting from my first ever powerlifting total of 600kg in 2011, 40kg a year would theoretically put me at 1000kg by 2021, at the age of 29 and 10 years of competing. So if I did 4 conservative training cycles a year, and added 10kg to my total each cycle, I could potentially join that elusive club.

I’m not saying this would have happened, just using the theoretical projection to make a point. I understand it’s not linear. Fuck off Captain Obvious.

Lesson Learnt
What does this mean? It means that insane training blocks will average out over time. You can engage in all kinds of bursts of insanity, but NONE of it will change the long term outcome. The projection should always be a career into your 40’s. Chart my performance and nothing I did let me escape that maxim. And rather than learning, I smashed my head into the wall repeatedly until I did learn.

The drop off rate of Australian juniors has been notoriously high. I won’t name them, but the years are littered with juniors and teens, encouraged by Instagram narcissism, coaches and short sighted view points to forget the long picture in pursuit of the short. We seek the glory, but lack the patience to achieve it.

It’s a lesson well learnt, and as I finally come back to training regularly, with reasonable effort and intensity, I am resolute to never lose the joy in what I do. Being unable to perform a light 5×5 with 60% without week long soreness teaches you a lesson or two.

For anyone wondering about my plans are. My health is my first and foremost concern. I hope to back on the platform either late 2017, or sometime in 2018. My goal will be to make an improvement of my 855 from 2014 of around 880kg. From there, I will be taking my own advice and focus on the basics of slow progress and moderate cycles.

There are many junior powerlifters doing incredible and exciting things right now. My caution is to apply patience and watch how many of them are here in 2 years. I’m in this for the long haul. My 2 year stagnation will one day be a small part of what I hope is a multi-decade career in this great sport.

Strength is an old man’s game. But you have to get old in one piece first. You can make a sizzle in 2 years, or you can simmer for 20. I burnt my first  steak, but from here on it’s a slow roast to 40, and it’s gonna be delicious.